I’m not sure why, but Audiobooks.com is offering the audiobook version of Schneier on Security at 50% off until January 17. 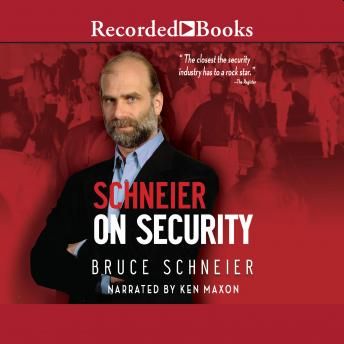 EDITED TO ADD: The audiobook of We Have Root is 50% off until January 27 if you use this link .

Author and public-interest security technologist Schneier ( Data and Goliath , 2015) defines a “hack” as an activity allowed by a system “that subverts the rules or norms of the system […] at the expense of someone else affected by the system.” In accessing the security of a particular system, technologists such as Schneier look at how it might fail. In order to counter a hack, it becomes necessary to think like a hacker. Schneier lays out the ramifications of a variety of hacks, contrasting the hacking of the tax code to benefit the wealthy with hacks in realms such as sports that can innovate and change a game for the better. The key to dealing with hacks is being proactive and providing adequate patches to fix any vulnerabilities. Schneier’s fascinating work illustrates how susceptible many systems are to being hacked and how lives can be altered by these subversions. Schneier’s deep dive into this cross-section of technology and humanity makes for investigative gold.

The book will be published on February 7. Here’s the book’s webpage. You can pre-order a signed copy from me here .

Good advice on buying squid. I like to buy whole fresh squid and clean it myself.

As usual, you can also use this squid post to talk about the security stories in the news that I haven’t covered.

Brian Krebs is reporting on a vulnerability in Experian’s website:

Identity thieves have been exploiting a glaring security weakness in the website of Experian, one of the big three consumer credit reporting bureaus. Normally, Experian requires that those seeking a copy of their credit report successfully answer several multiple choice questions about their financial history. But until the end of 2022, Experian’s website allowed anyone to bypass these questions and go straight to the consumer’s report. All that was needed was the person’s name, address, birthday and Social Security number.

I don’t know how much of a thing this will end up being, but we are seeing ChatGPT-written malware in the wild.

…within a few weeks of ChatGPT going live, participants in cybercrime forums—­some with little or no coding experience­—were using it to write software and emails that could be used for espionage, ransomware, malicious spam, and other malicious tasks.

“It’s still too early to decide whether or not ChatGPT capabilities will become the new favorite tool for participants in the Dark Web,” company researchers wrote. “However, the cybercriminal community has already shown significant interest and are jumping into this latest trend to generate malicious code.”

Last month, one forum participant posted what they claimed was the first script they had written and credited the AI chatbot with providing a “nice [helping] hand to finish the script with a nice scope.”

ChatGPT-generated code isn’t that good , but it’s a start. And the technology will only get better. Where it matters here is that it gives less skilled hackers—script kiddies—new capabilities.

The two people who shut down four Washington power stations in December were arrested . This is the interesting part:

Investigators identified Greenwood and Crahan almost immediately after the attacks took place by using cell phone data that allegedly showed both men in the vicinity of all four substations, according to court documents.

Nowadays, it seems like an obvious thing to do—although the search is probably unconstitutional . But way back in 2012, the Canadian CSEC—that’s their NSA—did some top-secret work on this kind of thing. The document is part of the Snowden archive, and I wrote about it:

The second application suggested is to identify a particular person whom you know visited a particular geographical area on a series of dates/times. The example in the presentation is a kidnapper. He is based in a rural area, so he can’t risk making his ransom calls from that area. Instead, he drives to an urban area to make those calls. He either uses a burner phone or a pay phone, so he can’t be identified that way. But if you assume that he has some sort of smart phone in his pocket that identifies itself over the Internet, you might be able to find him in that dataset. That is, he might be the only ID that appears in that geographical location around the same time as the ransom calls and at no other times.

There’s a whole lot of surveillance you can do if you can follow everyone, everywhere, all the time. I don’t even think turning your cell phone off would help in this instance. How many people in the Washington area turned their phones off during exactly the times of the Washington power station attacks? Probably a small enough number to investigate them all.

While no customer data was accessed during the August 2022 incident, some source code and technical information were stolen from our development environment and used to target another employee, obtaining credentials and keys which were used to access and decrypt some storage volumes within the cloud-based storage service.

To date, we have determined that once the cloud storage access key and dual storage container decryption keys were obtained, the threat actor copied information from backup that contained basic customer account information and related metadata including company names, end-user names, billing addresses, email addresses, telephone numbers, and the IP addresses from which customers were accessing the LastPass service.

The threat actor was also able to copy a backup of customer vault data from the encrypted storage container which is stored in a proprietary binary format that contains both unencrypted data, such as website URLs, as well as fully-encrypted sensitive fields such as website usernames and passwords, secure notes, and form-filled data.

That’s bad. It’s not an epic disaster, though.

These encrypted fields remain secured with 256-bit AES encryption and can only be decrypted with a unique encryption key derived from each user’s master password using our Zero Knowledge architecture. As a reminder, the master password is never known to LastPass and is not stored or maintained by LastPass.

So, according to the company, if you chose a strong master password—here’s my advice on how to do it—your passwords are safe. That is, you are secure as long as your password is resilient to a brute-force attack. (That they lost customer data is another story….)

Fair enough, as far as it goes. My guess is that many LastPass users do not have strong master passwords, even though the compromise of your encrypted password file should be part of your threat model. But, even so, note this unverified tweet:

I think the situation at @LastPass may be worse than they are letting on. On Sunday the 18th, four of my wallets were compromised. The losses are not significant. Their seeds were kept, encrypted, in my lastpass vault, behind a 16 character password using all character types.

If that’s true, it means that LastPass has some backdoor—possibly unintentional—into the password databases that the hackers are accessing. (Or that @Cryptopathic’s “16 character password using all character types” is something like “P@ssw0rdP@ssw0rd.”)

My guess is that we’ll learn more during the coming days. But this should serve as a cautionary tale for anyone who is using the cloud: the cloud is another name for “someone else’s computer,” and you need to understand how much or how little you trust that computer.

If you’re changing password managers, look at my own Password Safe . Its main downside is that you can’t synch between devices, but that’s because I don’t use the cloud for anything.